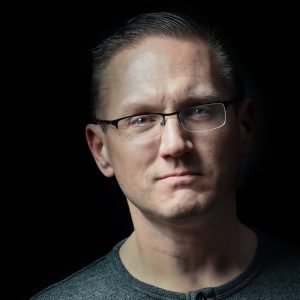 Calvary Church and the Cincinnati Fusion Ensemble cordially invite you to a special organ recital TOMORROW NIGHT presented by renowned organist GREG ZELEK. This will be a marvelous opportunity to hear and celebrate some of the enhancements recently implemented to Calvary’s historic pipe organ. We are deeply indebted to Mr. Sanford Martin for making all of this possible!

Mr. Zelek is one of the United States’ most lauded young organists; he currently serves as Principal Organist of the Madison (Wisconsin) Symphony Orchestra and Curator of the Overture Concert Organ, where he oversees all of the MSO’s organ programming. To learn more about Greg Zelek, visit his website. 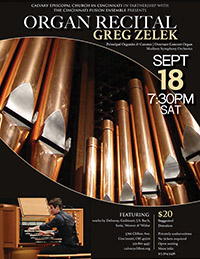 Calvary Church has been blessed for decades to have one of the finest pipe organs in the region. Especially for a parish church, the organ’s scope and tonal palette is unusually large. But, despite its size, it has been carefully voiced for the room so that it can sing and sound in a balanced, appropriate way. The visible copper pipes in the chancel represent a tiny fraction of the 3,284 total pipes, most of which are hiding in the chamber behind the casework.

The organ was built in 1927 by the legendary Skinner company of Boston, and it was a little less than half the size of the current instrument. Much of the Skinner pipework was retained over the decades, and additional ranks (or sets of pipes) were added in order to make the instrument incredibly versatile. The Quimby Organ Company of Warrensburg, Missouri executed the major rebuilding of the organ in 1995, and has supervised ongoing principal work since then.

The organ’s primary role has always been to lead vibrant congregational singing, but it also effectively interprets a wide variety of solo organ literature, and is an excellent collaborative partner with the Choir. Over the years, many of the finest organists in the world have performed on and admired Calvary’s organ, including: Gerre Hancock, Todd Wilson, Paul Jacobs, Diane Belcher, Cameron Carpenter, Yun Kim, Stephen Cleobury, Benjamin Straley, Isabelle Demers, Michael Unger, Ken Cowan, Yoon-Mi Lim, Ray Nagem, and, as was recently discovered, the eminent French composer/organist Marcel Dupré in 1970, the year before his death.

Calvary’s rare, historic, and sizeable organ (like any pipe organ) naturally requires ongoing and highly-specialized maintenance. The parish has been a faithful steward of the instrument over the last near-century, but one particularly passionate individual has been tireless in their support: Sanford Martin. We are incredibly grateful to Sandy’s generosity not only in the past many decades, but during the recent maintenance and pipework additions that have been implemented.

These several improvements and modifications were completed under the expert workmanship of David Beck (from near Toledo, Ohio). Most of the changes will remain unnoticed by parishioners, as the majority of the project involved modification of the internal functions of the console (where the keyboards and pedalboard are located in the chancel) and how it communicates with the pipework. One of the significant new features is the capability of “recording” a performance by an organist, and having the organ “play back” that performance—kind of like a player piano, but with much more complexity. This feature has allowed, for the first time, the possibility of an organist to step out into the nave to listen to and evaluate balance, color, dynamics, etc. of any given work the individual played on the organ.

There has also been a new (repurposed) rank of soft pipes, an 8’ Nason Gedackt, added to the Choir Division. And, in the Swell Division, newly-created reed pipes have been added to expand the 8’ Trompette one octave below and one octave above the current compass. These additions aren’t visible from the nave or chancel, but they will be heard.

We hope that this current maintenance will help Calvary’s organ continue to inspire souls, spark creativity, and lift faithful voices…both now and in future generations.

But for now, come hear Greg Zelek explore the widely-varied buffet of sound from Calvary’s organ!