Wandering in an Unvaccinated Desert 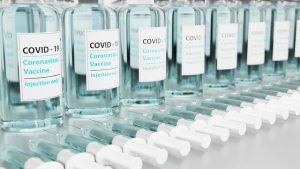 It’s a good time to recall an Hebrew Bible (Old Testament) tale that we don’t hear in the lectionary. In both Numbers 13:1–33, and repeated with some differences in Deuteronomy 1:22–40, we can read about the group of Israelite chieftains from each of the Twelve Tribes of Israel who were dispatched by Moses to check out the Land of Canaan.

God had promised a secure future in the Promised Land. Moses wanted to know how viable the land actually was— did it have agricultural potential? Were the cities organized? What were the conditions of the forests?

Ten of the twelve spies reported little promise for the promised land. They reported all of the things that could go wrong. They didn’t trust what the LORD their God had assured them was true.

Consequently, the entire nation of Israel wandered in the desert for 40 years, until almost their entire generation had passed. The only men from their generation who had delivered a promising report to Moses were Joshua and Caleb. They believed that God would be on their side. These happened to be the only two men who actually entered the promised land after the years of wandering.

My siblings in Christ, take heart. We may be wandering in a partially-unvaccinated desert, with half of the adults in our city and nation questioning vaccination and mask efficacy. That can be mighty disheartening as we move through the second half of the second year of this pandemic.

May we be like Joshua and Caleb. May we trust in the hope of God’s gift to humankind of science and the scientific method, in all of its trial and error, changes and chances.

We may be wandering for a while yet. But we have ancient promises from a steadfast God that the promised land is before us.